We are delighted to announce the deposit of the Alan Turing Memorial Fund archives. The small but meticulously arranged collection includes correspondence, press cuttings, accounts, original designs, publicity and even Manchester City Council’s planning permission for the sculpture. The accompanying photographs of the statue being sculpted, installed and unveiled bring the campaign to life.

Alan Mathison Turing, 1912-1954, is best known as the cryptographer whose invention helped to crack the Enigma code during the Second World War. He is considered the father of computer science;  he was part of the team who worked in Manchester on one of the world’s earliest computers. Turing’s honesty about his homosexuality led to him being prosecuted for gross indecency in 1952. He committed suicide two years later.

The Alan Turing Memorial Fund was set up in 1997 by Stockport barrister Richard Humphry. His original inspiration was a performance of ‘Breaking the Code’ by Hugh Whitemore at the Garrick Theatre in Stockport. The aim of the fund was to erect a statue of Turing in Sackville Gardens, in the Gay Village and not far from the University of Manchester. Sir Derek Jacobi, who played Turing in the 1996 film adaptation of ‘Breaking the Code’, was the fund’s patron. Its supporters included Sir Ian McKellen, Ned Sherrin and Carol Vorderman.

The statue is made up of a lifesize Alan Turing sitting on a bench, holding the fateful apple. It is cast in bronze and was designed and sculpted by industrial sculptor Glyn Hughes. The inscription ‘Founder of Computer Science’ is displayed in front of the statue in an Enigma-like code.

The press cuttings and correspondence show how difficult the organisers found it to raise awareness and financial support for their aims. No major computer company contributed to the fund, and they faced claims that Turing had been a marginal academic figure. When the fund decided to switch construction of the statue from England to China on financial grounds, it was accused of making the tribute on the cheap! But with the help of fundraiser Roy Jackson more than £20,000 was raised within 12 months. 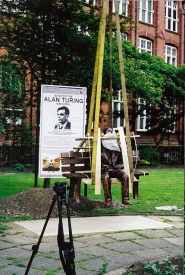 The statue was unveiled on Turing’s birthday, 23 June, in 2001. In a nod to the technological revolution Turing’s work inspired, Glyn Hughes’s phone and an Amstrad computer were buried underneath the concrete plinth.

Within a week, a pot of paint had been thrown over the statue. As Richard Humphry notes, one speculation was that the vandal might have been a Nazi sympathiser, a homophobic bigot, or someone who hated mathematics at school or all three!

In contrast to the problems faced by the fund in raising his profile in the late 1990s, it is difficult to miss Alan Turing in his centenary year. An exhibition at Manchester Museum charts his work on morphogenesis, while the Turing’s Sunflowers is a mass citizen science experiment organised by the Museum of Science and Industry. In June the Olympic torch relay visited the statue to acknowledge Turing’s athletic prowess. The theme of this month’s Manchester Pride Parade is ‘Queer’d Science’ in his honour. 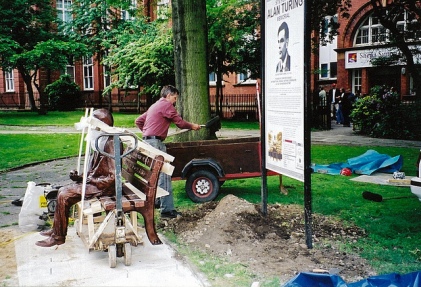 All of which means that now would be a very good time to enjoy the hard work of the memorial fund by sitting down with Alan in Sackville Gardens and reflecting on his legacy.

Manchester Libraries holds a variety of books on Turing. The bulk of his archives are held by King’s College, Cambridge, and many have been digitised. To find out more about the memorial fund, why not make an appointment to view the archives at the Greater Manchester County Record Office? The collection is stored in the code-locked leather briefcase in which it was deposited. Don’t worry, though, we’ll give you the secret code!