On August 16th 1819 a meeting of between 60,000 and 80,000 people calling for parliamentary reform was held at St Peter’s Field in Manchester. The peaceful meeting was broken up by the town’s Yeomen, under the instruction of the Manchester magistrates. Between 15-20 were killed and hundreds were injured. The event became known as the Peterloo Massacre. August 2019 will mark the 200th anniversary of the Peterloo Massacre. This series of blogs will look at different aspects of the Peterloo Massacre through the materials available in Archives+, including ballads, pamphlets, cartoons and broadsheets.

Blog 1: Before the Massacre

A paperback play with a rust coloured front cover entitled ‘The Massacre at Peterloo’ is held in Archives+. The play was written by John Hipkin and published in 1968 by Heinemann. In the introduction to the play, Hipkin states that he hopes the script will be taught and performed in schools, so that children might be educated on the 1819 Peterloo Massacre. The play requires, he writes, a cast of hundreds.

The play opens with a character referred to as ‘Scholar’ describing the conditions in Manchester in 1819. The scholar recounts the words of ‘a historian’ who wrote: ‘It (Manchester) was not so much a town as a barracks…a town grown vast in the short space of fifty years, a mass of mills and damp, mean houses erected with a disregard of everything except immediate profit.’

The town had indeed developed rapidly. At the start of the 18th Century Manchester was a market town of less than 10,000 people. By the end of the century the population had grown to 89,000 people, a consequence of the town’s the burgeoning cotton industry. Homes to cater for workers were squalid and overcrowded. Working conditions in the factories and mills were dire.

The Napoleonic Wars had ended in 1815. Unemployment and food shortages across England had resulted. Alongside this, the first Corn Law was passed in England in 1815. The law imposed a tariff on all grain imported to England as a means of protecting English grain producers. Consequently, the cost of food rose across the country and periods of famine ensued.

In Hipkin’s play we are introduced to the handloom weaver Samuel Hibbit and his wife, Martha. They occupy, with their daughter, a ‘dank room’ in Manchester. Like many handloom weavers who did not go to work in the mills, Samuel had seen his workload dry up. He earns, he bemoans, ‘a pittance’. He fondly reminisces about his childhood, growing up in a house in the lush, green meadows of Middleton.

The historian Frank O’Gorman writes in the Manchester Region History Review that Manchester was ‘politically backward’. The town had no representative in Parliament and the magistrates responsible for the administration of Manchester lived over forty miles away. The magistrates took little interest in the living conditions of the ‘manufacturing classes.’

Samuel is visited at his room by a local radical named Peter Saxton. Peter describes a large- scale reformist meeting set to take place by St Peter’s Church in Manchester on August 16th 1819. The meeting has been organised by the Manchester Patriotic Union and will be chaired by the renowned radical orator Henry Hunt. 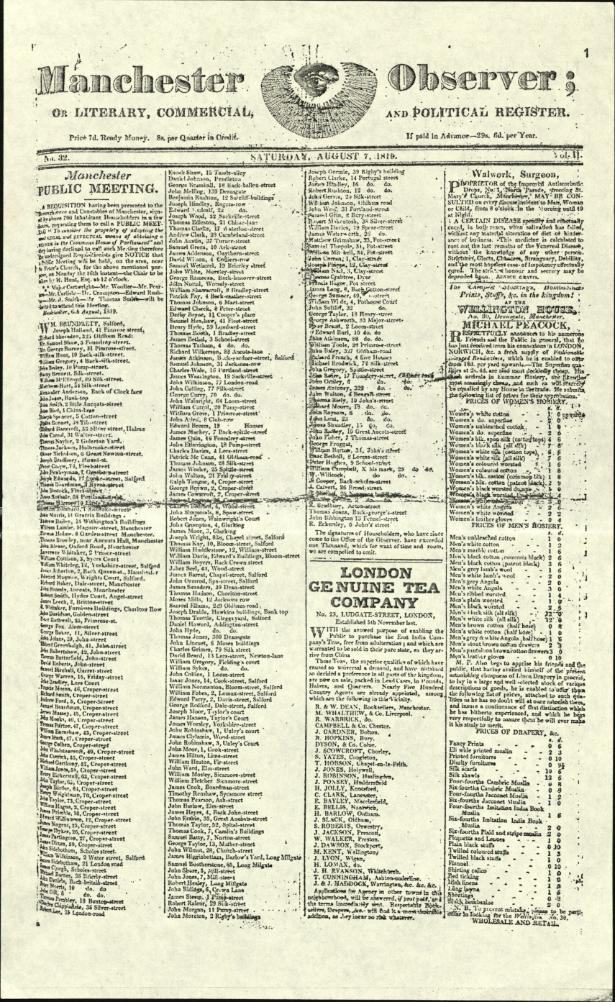 The aim of the meeting, as printed in the radical newspaper The Manchester Observer, was ‘to consider the propriety of adopting the most LEGAL and EFFECTUAL means of obtaining a reform in the Common House of Parliament’. That is, to find a way to obtain parliamentary representation for Manchester.

This exchange greatly displeases Martha who has been lurking resentfully in the background. She exclaims: ‘That loud-mouthed tub-thumper, Henry Hunt. He’ll lead us all to Hell and Damnation!’

Mass meetings calling for parliamentary reform had been an increasing occurrence in England following the end of the Napoleonic Wars.

Henry Hunt had spoken at St Peter’s Field in January 1819, to call for a repeal of the Corn Laws. 10,000 people had attended this rally, which had passed peacefully. However, the Manchester magistrates were frightened of what they perceived to be an increasingly disgruntled population. They wrote to the home secretary Lord Sidmouth in July 1819 expressing this fear and decrying the ‘demagogues’ and radical presses who were inciting the people to action.

An article taken from the September 1819 edition of the periodical the Christian Observer is available to read through Archives+. The article is titled, ‘View of Public Affairs’. The author of this article offers an inflammatory account of the reformists:

‘By means of the press, and of public meetings, the minds of the population are filled with hatred of their rulers, and of all superior orders of society, and with hostility to every existing institution, civil and ecclesiastical.’

Authority figures and loyalists in England were mindful of the recent revolution in France, fearing a similar turn of events in England. Indeed, the author of The Christian Observer article takes pains to stress the French revolutionary regalia purportedly worn by some of those who attended the August 16th meeting in Manchester.

‘…And, that no doubt might be entertained as to their real purpose, they adopted some of the most notorious badges of the French revolution’.

The author concludes the government must ‘stem the tide of sedition, irreligion and impiety, which threatens to inundate us!’

Much to the chagrin of Martha, Peter continues to beseech Samuel to attend the August 16th meeting. Gazing around his squalid room and recalling the long ago ‘better days’, Samuel becomes more enamoured of the idea. Peter promises Samuel, ‘the biggest meeting ever seen in Lancashire, in England!…On that day we will be asserting our right as men and women to live our lives in freedom and equality’.

John Hipkin, ‘The Massacre of Peterloo: a dramatization of the massacre which occurred in Manchester on August 16th 1819’, Heinemann, 1968