I am currently researching the development of LGBT+ rights in Britain, looking through  various archives about the battle this community faced in becoming a respected part of our society. Manchester often spearheaded campaigns to give LGBT+ people equal rights, as will become evident in the remainder of my blog.

I found the battle homosexual servicemen and women faced to be allowed to fight for their country particularly interesting; the fight against prejudice became more prevalent in their lives than actually fighting for their country. People believed that gay service people would be less professional than their heterosexual counterparts, due to the close proximity in which the armed forces live. This belief was maintained until the year 2000 (people could be openly gay and serve from then onwards), and my blog will explore the journey our nation took to reach this point.

In 1954, it was suggested to parliament that the law on conscientious objection to conscription should be extended to include the fear of being corrupted with homosexual acts in the army. Essentially suggesting someone could refuse conscription in fear of becoming gay while serving. Arthur Lewis brought this idea to parliament, suggesting the idea that homosexual acts were prevalent in the army even at a time when being homosexual was illegal for men.

The quote here by the Brigadier suggests homosexuality was a matter of embarrassment, and would be detrimental to the army’s reputation if associated with them. He immediately rebukes all claims of homosexuality in the army.

This illustrates how people believed that homosexuality was almost poisonous  – that anyone could so easily be corrupted by such acts, as if they were a disgraceful addiction. This belief was particularly prominent in the Armed Forces.

This belief continued even after homosexuality was legalized for males in 1967. In 1984, 87 service people were dismissed on the grounds of homosexuality in the British Armed Forces, a shocking statistic considering recent improvements in LGBT+ rights.

The below article shows how a number of powerful countries adopted a much more liberal approach to homosexuals serving in their military by 1993. Britain were yet to adopt such a stance, but articles like this one begin to show how the implicit tones of discontent for this law were beginning to manifest.

The majority of Europe’s elite armies allowed homosexuals to serve by the early 90s, but Britain still proudly stood with America in refusing the LGBT+ community access to their Armed Forces.

Despite this, by 1994, the United States took a step in allowing homosexuals in their armed forces with a directive known as “don’t ask, don’t tell.” This piece of legislate meant a closeted homosexual could not be discharged from the military, assuming they did not perform such acts while on service or disclose their sexuality. A senior officer could not investigate an officer for homosexuality without reasonable evidence also. Essentially, a service person could be gay outside of the barracks.

Britain had not took any such step in relaxing their anti-gay laws in the armed forces. While America’s step was not revolutionary, it still represented the intent to change, something Britain had not entertained as of yet.

We pick up our story in 1996, where Manchester joins fight against the ban on homosexuality in our armed forces.

FFLAG (Families & Friends of Lesbians and Gays) worked particularly hard for the rights of the LGBT+ community. The group formed as part of the Manchester Gay Centre, a place where the first LGBT+ youth work post in the whole country (1986). FFLAG were set up by the parents of young people at the gay centre to provide support that was not readily available elsewhere, and are now a nationwide organization.

Brenda Oakes, a key member of the organisation, fought this blind prejudice through a number of letters, to members of the Armed Forces and a prominent Member of Parliament. Said Archives offer a crucial insight into the culture and beliefs leading to this ban.

Below is the response to a letter written by Brenda to the grandson of Sir Winston Churchill, of the same name.

This quite clearly illuminates the deep-rooted nature of homophobia in the Armed Forces. The belief prevails that homosexuals cannot resist sexual temptation like heterosexual people, as if they are feral beasts.

Despite this, Churchill is not compelled to refuse the presence of homosexuals in the Forces, suggesting how people are seeing the community in a more liberal fashion – the first article in this blog shows a Brigadier embarrassed to be associated with homosexuality. Such reluctance to admit their presence in the Armed Forces appears to have diminished.

Ms Oakes continues with her campaign for the community to be judged on “individual merit alone.” A letter to Squadron Leader Small shows how her efforts were met with the same claims as were brought forward by Churchill, 42 years on from where we began our story of violent resistance of homosexuality in the Forces. 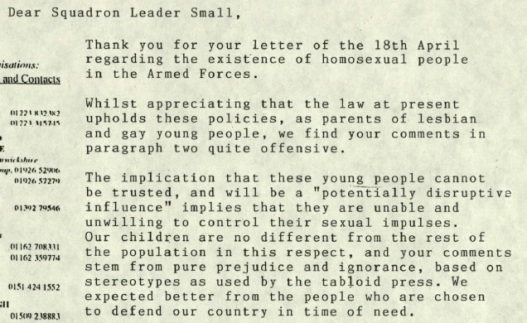 Such young people would be a “potentially disruptive influence.” These are similar to the claims made at the start of the blog, a worrying trend at a time when people appear to be more accepting of homosexuality.

Perhaps this shows that it is a lack of education that causes prejudice within the Armed Forces: if they are forced to accept the fact that homosexuals act like any other human (if the ban was lifted), their presence would not be opposed as vehemently.

The Liberal Democrat leader of 11 years claims such soldiers have as much value as others, and claims the Labour Government are not doing enough to fight prejudice

By 1998, the opposition to the legislation had reached boiling point, with five discharged soldiers spearheading the charge to change the law. Robert Ely, a British army soldier of 17 years, approached the LGBT+ charity Stonewall after he was removed from the army after the discovery of a letter, one that proved his sexual orientation as gay.

Following on from this, four others, Jeanette Smith, Graham Grady, John Beckett and Duncan Lustig Prean each became embroiled with the legal battle to overturn the law, one that progressed from the High Court to the European Court of Appeal by 1999/2000.

The final verdict was reached in the latter court. With the High Court unable to act, the European Court of Appeal in Strasbourg pressured the Labour Government to immediately lift the ban.

A week before the verdict, 68% of Britons voted that they were in opposition of the ban in a nationwide poll.

This is where the story ends. I think it is interesting to note the above statistic – the public’s opinion of homosexuality was changing simultaneously with the change of legislation for Armed Forces soldiers. Homosexuality and the Armed Forces is a pivotal case study that shows the battle, outside of the trenches and barracks, that homosexual service people fought to be allowed to serve.

One thought on “Homosexuality and the Armed Forces”