In an infamous speech to the applauding attendees of the 1987 Conservative party conference Margaret Thatcher described her sympathy for the “plight” of a generation of children who were growing up with the delusion that they had an “inalienable right to be gay”. Unsurprising then is the fact that only a year later her government introduced the first piece of homophobic legislation to be passed in Britain in a century: the passing of Section 28 of the Local Government Act in 1988 made it illegal for public bodies in Britain to “promote homosexuality” or “promote the teaching in any maintained school of the acceptability of homosexuality as a pretended relationship”. The new law, for instance, prohibited teachers from discussing same-sex relationships and prevented libraries from stocking books and films with gay and lesbian themes.

Archives at Manchester Central Library reveal how the people of Manchester, from progressive local politicians and city councillors to street protesters and activists, consistently rallied against Section 28, fighting for equality at a time when the government was passing legislation to undermine it. As Manchester Pride approaches, ‘Never Going Underground: Manchester’s Resistance to Section 28’ will explore the wealth of archival materials held by Manchester Central Library to celebrate this important chapter in our city’s history.

Photographs in the Council’s local image collection on Flickr show how opponents to Section 28 made their voices heard on the streets of Manchester. On 20th February 1988 tens of thousands of protestors marched through Manchester city centre as part of the largest LGB rights demonstration in British history. These images capture the spirit of proud defiance that characterised Manchester’s response to Section 28.

To organise the march, which was followed by a ‘festival of speakers and entertainers’ at the Free Trade Hall, local activists attended meetings held by the North West Campaign for Lesbian and Gay Equality (NWCLGE) at Manchester Town Hall. In response to Section 28 the NWCLGE (formed in 1987) adopted the slogan ‘Never Going Underground’ to represent the proud defiance of their community.

The leaflets produced by the NWCLGE to spread the word about the rally highlight the fears that Section 28 provoked for many gay and lesbian people in Britain. In their own words these activists articulate the potential threat that it posed to their rights to freedom of expression, association and equal treatment. This clearly resonated with the many thousands who were inspired to take to the streets in protest. 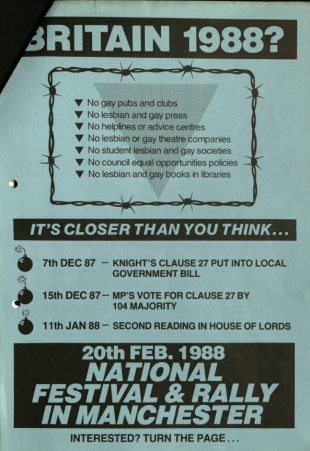 In an age in which gay marriage was introduced by a Conservative government and Pride month is celebrated by multinational corporations, it might be easy to dismiss this vision of a Britain devoid of “gay pubs and clubs” or “council equal opportunities policies” as paranoid. But Section 28 passed in a climate of increasing homophobia, exacerbated by the largest public health crisis in postwar memory. In a poll taken in 1987, three quarters of British people polled by the British Attitudes Survey agreed that homosexuality was “always or mostly wrong”. And whilst in 1982 only 39% of respondents to a gallup poll said that they felt “gay or lesbian relations between consenting adults should not be legal”, this number had risen to 57% only four years later. With this climate in mind the fears articulated in these pamphlets, of a Britain becoming more hostile to equality and increasingly suppressive of gay and lesbian spaces and expression, are understandable.

But the resistance to Section 28 in Manchester did not end on the streets. Archives at Manchester Central Library show how Manchester City Council continued to play an important and active role in promoting equality despite Section 28.

In a speech given at the 1988 rally the leader of Manchester City Council at the time, Graham Stringer, declared his support for the protest and committed local government to protecting the rights of gay and lesbian citizens, proclaiming that “Manchester City Council and the Labour Party in Manchester are not prepared to be used to help create second class citizens in the city or anywhere else”. Footage of the rally, including this speech, is available for viewing at Manchester Central Library.

Indeed, councillors were resolute that the new legislation would not undermine their efforts to promote equality, which had been declared a “major priority” of the Council since 1984. That year the Council’s new Equal Opportunity Policy stated that “we are totally opposed to sexism and racism in all their forms and to discrimination against lesbians and gay men and disabled people”. In relation to lesbians and gay men the policy asserted that “our society puts great pressure on people to be heterosexual which creates difficulties for lesbian women and gay men in accepting themselves and and living openly in society without discrimination. We will use the resources of the Council to support campaigns for equal rights, increase public awareness of the issues and identify and remove discriminatory practices in Council employment and services. We will continue to support and fund essential services provided by the Gay Information Centre.”

These efforts by the Council continued despite the introduction of Section 28. In 1988 the Council issued over 6000 pamphlets to advise local government employees on how to respond to the new law. In one, a “Guide for Workers in the Social Services Department”, social service providers are reminded that gay and lesbian service users will not be denied the full range of services provided for by the Council as a result of Section 28. It also states that “the council recognises the widespread prejudice which faces lesbians and gay men” and makes an important distinction between working to reduce this discrimination by promoting equality and “promoting homosexuality” itself.

Whilst Section 28 is often remembered today as a symbol of outdated bigotry and intolerance, these archives illustrate that in Manchester it was also an important milestone in the city’s gay and lesbian history, politicising those who felt attacked by the government’s attempt to force their community underground. The protest it inspired brought people together, on the streets, in the Town Hall, and saw local politicians come out to defend the rights of their citizens no matter their sexual orientation. As Pride in Manchester approaches, this important and inspirational chapter in our city’s radical history should be remembered.