The arrival of Empire Windrush at Tilbury docks seventy years ago marked a new era in British immigration history.  Using the archives available at Manchester Central Library this blog post will explore how the Windrush generation was represented and discussed in the postwar British press. Reading these newspaper articles paints an interesting history of public and political attitudes to Caribbean immigration in the mid-20th century, giving context to legislative changes that continue to shape the experience of immigrants to Britain today.

The decades after World War Two were a period of transformation of British policy on Commonwealth immigration. The British Nationality Act of 1948 established the status of Citizen of the United Kingdom and Colonies, meaning that anybody who could prove that they had been born within the British Empire had the right to settle and work in Britain. That year, 492 Jamaicans arrived in Britain on the Empire Windrush, “to seek the work they could not find in their own country” (Manchester Guardian, 1948), welcomed, the article states, by sightseers’ “waves of greeting”. The British government were, at this point, keen to encourage immigration from the Caribbean in order to fulfil labour shortages that arose after the war.

“Closinq door to immigrants “ever so gently””
The Guardian, 1961

But whilst the 1948 British Nationality Act had given commonwealth citizens extensive rights to migrate to the UK, legal measures to tighten controls on colonial migration to Britain were gradually introduced in the years following the arrival of Empire Windrush in 1948. Press coverage of the late 1950s and early 1960s reflects the shift in public attitudes towards Caribbean migration that precipitated this legal redefining of British citizenship. In a 1954 article entitled “Immigrants from West Indies – Influx May Compel Some Control”, the political correspondent to the Manchester Guardian reported on how the Minister of State for Colonial Affairs had responded to a Commons debate concerning the “problem created by the large number of Colonial immigrants”, described as “pouring” into Britain in their tens of thousands, many “without any prospect of work here or housing”. Whilst the journalist reported that the minister didn’t doubt the right of these “British citizens” to emigrate, the implications of a principle that entitles “several hundred million” to come to the UK appears to be a cause of concern. In December 1960 the Manchester Guardian ran another headline: “Limiting Entry into Britain: Pressure Mounting”, in which it describes how “the pressure for such a fundamental change in the liberties of British citizenship have never been stronger”. 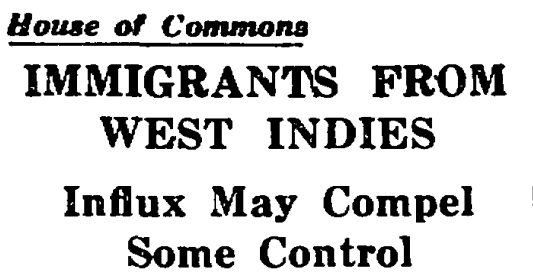 These articles, available to read at Manchester Central Library, give insight into why the first of numerous legislative attempts to curb commonwealth immigration was passed in 1962. The Commonwealth Immigrants Act, although unsuccessful in drastically reducing immigration to Britain, marked the first occasion that Britain used legislation to restrict commonwealth immigration, establishing for the first time a distinction between the rights of those who were born in Britain and held passports issued in Britain, and those with passports issued by other commonwealth governments. This significant piece of legislation overturned the extensive rights enshrined in 1948, instead creating a system whereby only those who had received employment vouchers from the British government could migrate here.

As contemporary newspaper articles illustrate, this change was not implemented without provoking controversy and resistance. A 1961 article entitled ‘Plea Against Restrictions’ from the Times outlines the considerations of a paper published by the West Indies Commission in London in response to propositions to restrict commonwealth immigration. Hospitals, British Railways, London Transport and the catering industry are cited as the chief beneficiaries of Caribbean immigration, helping to alleviate Britain’s postwar “manpower scarce”. Coverage of a discussion initiated in the House of Lords in the same year by The Guardian demonstrates that criticism of attempts to undermine the 1948 British Nationality Act was not confined to the West Indian community. Lord Silkin was quoted as saying that “restricting and controlling entry into this country will very considerably weaken the ties of the Commonwealth”, urging the government to delay the passage of any legislation until the Commonwealth had been consulted. In January 1962 in an article entitled ‘More Fight The Immigrants Bill’ the Guardian reported on the formation of a committee of public and political figures, including academics, Lords and bishops, who collectively signed a declaration against the 1962 bill, arguing that the need for it “has yet to be established, and that its effects will be to increase racial tension and to damage the sentiments on which the Commonwealth was grounded”.

And yet despite this kind of protest the Commonwealth Immigrants Bill was successfully passed into law in 1962, to be followed by future pieces of legislation that sought to further reduce commonwealth immigration. Articles such as one written in the Guardian by MP Sir Cyril Osborne in 1961 depict the public discontent with immigration that led to these increased restrictions. He argues that  “In housing, hospitals, and social services, our own people are compelled to compete with the immigrants”, suggesting that it is the “unfortunate English family” which “has had to bear the social stresses which unlimited immigration has brought.” Competition for housing is one issue brought up in many other articles around this time. In 1960 the Guardian published the findings of a report prepared by the Family Welfare Organisation for the trustees of the London Parochial Charities. Housing was found to be “by far the most important problem” facing Caribbean immigrants, not only because they tended to pay more in rent than the national average but because it was a source of “antagonism with their white neighbours in some areas”.

At times this antagonism sparked violent rioting. Whilst the five nights of violence that erupted in Notting Hill in the summer of 1958 were widely reported on in the press as “racial riots”, the police rejected this notion, insisting instead that the violence committed against black people in Notting Hill by gangs of “youths” was simply an “extension of hooliganism” (Manchester Guardian, 1958). Contrary to this explanation were the leaflets spread by fascist groups, illustrating how racism was a problem in the area. A 1958 article in the Manchester Guardian quotes a Union Movement pamphlet that had been brought to the British Caribbean Welfare Service directing the “people of Kensington” to “take action now. Protect your jobs. Stop coloured immigration. Houses for white people – not coloured immigrants. A square deal for the negro in his own country.” According to the Manchester Guardian, there were “echoes of Notting Hill in parliament” following the rioting, with MPs attempts to pass legislation that would reduce immigration. The disturbances in Nottingham and Notting Hill that year are described as having “darkened” the discussion on immigration.

In just a few decades British policy on Caribbean immigration was transformed. Laws such as the Commonwealth Immigration Act (1962) and the Immigration Act (1972) replaced the extensive rights that were granted to Commonwealth citizens after the war, with the latter meaning that only those with certain family members already settled in Britain could migrate here, and forcing those who had migrated before the Act to prove when they had arrived. Like its predecessor in 1962, this new attempt to reduce Commonwealth immigration faced protest from various organisations, such as the National Council for Civil Liberties and the Joint Council for the Welfare of Immigrants, but was ultimately passed.

Today’s media has recently drawn attention to the negative implications of these laws on black British citizens, with many of the earlier Commonwealth immigrants, largely of Caribbean descent, now struggling to provide the extensive evidence that the Home Office demands as proof of their arrival in Britain before the Immigration Act (1971) came into effect. Whilst the press might be giving a voice to people of the Windrush generation today, it is strikingly clear when looking at the newspaper archives available at Manchester Central Library that their input was often missing from public debate in the years after their arrival, with few articles directly covering their lived experiences or including interviews with Windrush immigrants. Perhaps this exclusion relates to the steady erosion of immigrants’ legal rights in the latter half of the 20th century, leading to the precarious situation some in the Windrush generation now find themselves in.