Welcome to Manchester Central Library. Today we take you on a journey into the sounds and stories of Mr Paul Graney. Paul thought of himself as just ‘one bloke’. He was anything but.

By day, Paul was a pipe-fitter, but he spent his spare time travelling around the North West in the 1960s and 1970s, and using his portable reel-to-reel recorder, he documented the sounds and stories of people from across the region and beyond. Paul was interested in ‘the common people’, their histories and traditions, stories and songs. 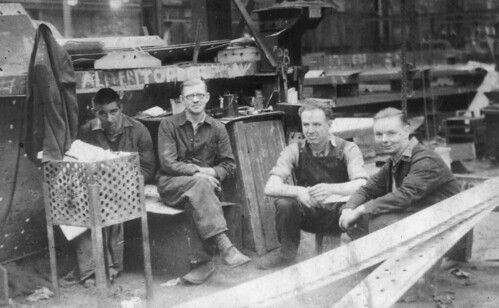 Paul was a good listener and he had a knack for getting people to talk about themselves, as Ken Thompson, Paul’s friend, neighbour and fellow folk music enthusiast, remembers.

Paul didn’t talk very much about himself to other people, other than to his closest friends. But in the late 1970s, Paul was prompted by his friend Barry Seddon, into recording his own oral history on tapes which became known as the ‘Memory Tapes’.

The flat that Barry mentioned there was Paul’s one-room bedsit at 4 Carlton Road in Whalley Range, where Paul lived in the 1960s and 1970s. Paul’s bedsit was full with stacks of papers, and boxes of tapes and reels of his recordings. Ken Thompson explains…

Everyone who knew Paul knew his knowledge of folk music, folklore, and history of Lancashire and beyond was unrivalled. Paul was a talented photographer and a keen historian, regularly researching local histories and myths here at Manchester Central Library. 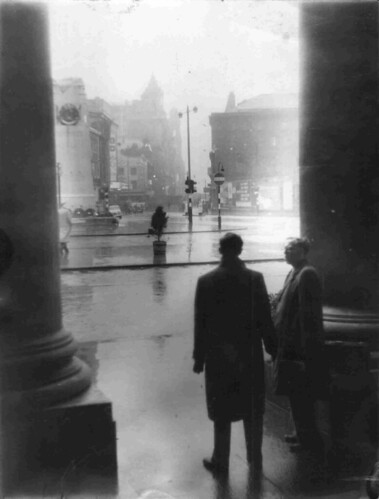 Paul’s friends also knew how valuable his archive – of music and song, interviews and radio – was.  In 1981, a year before he died, Paul made the necessary arrangements for the preservation of his archive, with his friend, Barry Seddon.

And it is a selection of these rich and unique recordings – mixing song and story, memory, myth and music – that we want to share with you. The Paul Graney Archive contains more than 1,800 recordings consisting of live music, radio programmes, tape letters, memory tapes and oral history interviews, which have been digitised thanks for the Paul Graney Memorial Folk Trust, with support from the Heritage Lottery Fund.

Today, we delve into Paul’s recordings to explore just some of the sounds and stories of Paul Graney. So, let’s go back to the beginning…

Paul Graney was born in August 1908 in the Bradford district of Manchester, to Joseph and Nellie Graney. He had an older half-sister, Sarah Florence, from his mother’s previous marriage. Paul’s father soon left the scene. The family moved briefly to Rochdale, where Paul’s mother remarried, and then on to Nelson, Lancashire.

Aged 12, Paul started as a half-timer, attending school half the day, and working in the mill for other half the day, and before long, he was full-time. Paul worked at the mill with his mother and his sister, and his first job there was to ‘mind’ the looms. Paul remembered the work as hard, dirty, noisy and monotonous. But there was also another reason Paul remembered his time in the mill.

After their time in the cotton mills of Burnley, Paul and his family moved back to Manchester when Paul was a teenager. He got a job with ‘Old Murphy’, an iron dealer in Collyhurst. Old Murphy, Paul recalled, was a nice chap but ‘stuck in the 1870s’. Amongst the tasks Paul was given, he was asked to fetch and carry iron goods around the district.

As a young man in the late 1920s and early 1930s, Paul regularly experienced bouts of unemployment. As well as signing on for dole monies twice a week, long-term claimants like Paul might receive a home visit, where officials would assess their possessions and order them to sell what they could. Paul and his mother received such a home visit in 1930.

After a prolonged period of unemployment and the pressure of the Means Test, Paul felt he had little option but to leave the family home and ‘tramp’ for work. His hobbies of camping and walking, and a home-made tent, put him in good stead for putting up with the terrible conditions of tramping in search of food, shelter and work. It was a constant struggle, Paul remembered, to find somewhere that was safe, warm, and dry.

Paul travelled far and wide as a tramp, and regularly stayed in ‘Spikes’ and ‘Doss Houses’ with other homeless and unemployed men.  Though there was certainly a camaraderie between the men who were all ‘down on their luck’ in these doss houses, there was also the threat of fellow tramps stealing each other’s possessions, including boots.

Paul spent time at Hyndman Hall in Salford and became involved in left-wing politics and direct-action anti-fascism. Paul remembers struggling to train up the boxers and wrestlers to fight dirty – because they were used to combat with rules. Paul taught them how to use improvised weapons hidden in socks and made from brooms. But the anti-fascist techniques were not all violent, like the time they successfully disrupted a Mosley rally in Queens Park in 1933.

Paul goes on to recount one occasion at the Free Trade Hall where he was dragged out of a fascist rally feet-first, unconscious, only waking up in hospital afterwards with his neck full of wood splinters. These experiences of being at the front of fights might go some way to explaining his dismissive attitude towards intellectuals at the back reading their books… 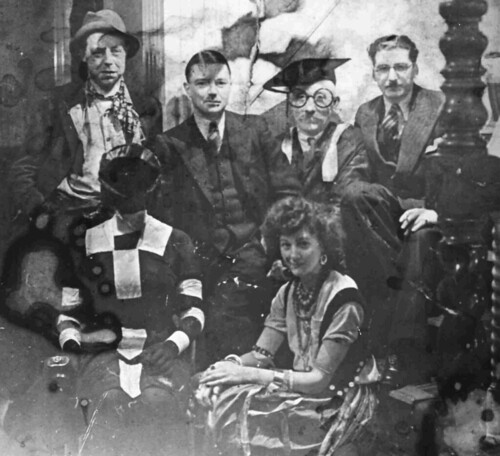 Paul became involved in the Theatre of Action with Joan Littlewood and Jimmy Miller (better known now as Ewan MacColl) – and more intellectuals! Paul explains that he didn’t think people were ready for Stanislavsky or agit-prop.

Paul’s role was not in acting – he pushed the barrows and made the scenery. Littlewood, however, maintained that everybody should be able to act. She forced Paul to act out a scene and the results were not pretty…

If you think Paul was hard on Littlewood then you should hear him on Walter Greenwood and his dialogue in Love on the Dole! Paul was not a man to mince his words. But it wasn’t all work, theatre and politics. Music played a huge part in Paul’s life. 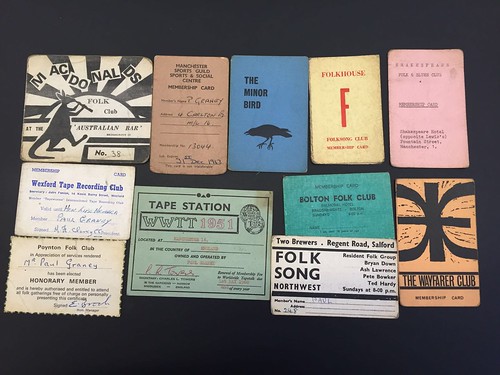 He took his reel-to-reel recorder to hundreds of folk gigs all around the North West by local and international artists. He recorded endless tapes of world and folk music off-air from the radio too. Paul was clearly fascinated by the derivations of the lyrics and tunes. He knew many of the local performers, like Mike Harding and the Frymans, and he would provide them with versions of songs copied from his archive.

The next song is a very special one. Paul wrote the words to The Story of Cotton himself based on his research into child labour and the Factory Acts. His friend Marie Little added the tune. Here’s Paul introducing the track and Marie singing it.

The next song is sung by Ivan Fryman, a former miner at Bradford Pit and a very talented folk singer. I’m told it’s also about working in the mills you but can be the judge of that… 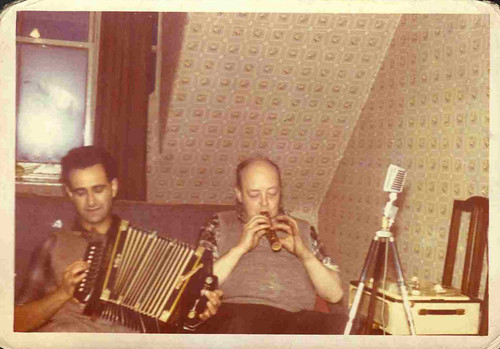 You can hear the coughing and spluttering, and the gasps at the bawdy lyrics in the background. Paul’s recordings are alive in a way only live recordings can be.

Paul called his collection of tapes ‘the archive’. He used the archive to edit together features to send to friends.

This next one is about the traditional Manchester song Way Down to Pomona. It’s a drinking song about a husband who on a dark, wet Manchester night meets a mysterious beautiful veiled woman – who turns out to be his wife. In this clip Paul threads together oral history testimony from Mrs Stubbs who remembers her father drunkenly singing the song and then gamely sings the song from memory, halting momentarily when she forgets some words. Paul then moves on to introduce an off-air radio recording of some fishermen singing the same song.

There are dozens of tape letters in Paul’s archive. Each starts with a name and an address. Tape letters were a way of communicating across continents, and of sharing music – often one side was talk and the other song.  This is a short mashup made from clips from the tape letters. It’s disorientating but it doesn’t last long and it gives a sense of their variety and intimacy.

We don’t have many of Paul’s letters, because they were sent out to his friends around the world, but we do have many that were sent to him. Perhaps even more than oral history, tape letters capture unguarded social history in their throwaway comments about work, immigration and politics. These were conversations between friends, and I bet few of Paul’s correspondents ever thought they would end up in an archive! 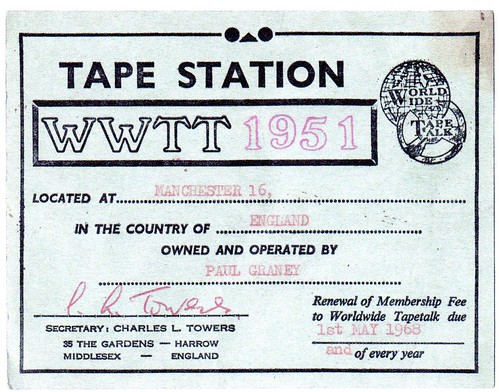 This clip opens up with Dorothy Fryman, Ivan Fryman’s wife. She berates Ivan and Paul for leaving her to do the cooking on their holiday in Inverness. The recording catches the group at play, relaxed, in a totally un-self-conscious moment. The recording is actually part of a tape letter to Phil Lutherin in Pennsylvania… 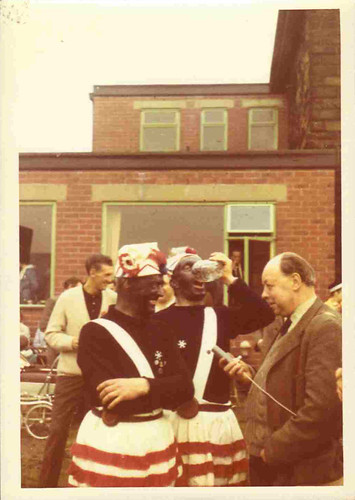 Paul was a pioneer of oral history. He probably didn’t think of himself as an oral historian but Paul recognised the value of people’s experiences and memories, and the importance of getting these ‘on record’, whether it was people talking about their childhood, their work, their town, or their music.

One of the most interesting and entertaining interviews in Paul’s archive is one which he conducted with a woman who worked as a prostitute in the Whalley Range district of Manchester.  In the interview, she tells Paul all about her escapades, her clients and their requests.

Paul interviewed people personally, but he also recorded social history interviews from BBC Radio broadcasts. This clip is Elsie Lewis, born in Leeds in 1911, who was interviewed by the BBC in the late 1960s. In the interview, she talked about the poverty she experienced during her childhood, which amongst other things, meant a severe lack of underwear.

In the interviews that Paul undertook, the trust and friendship shines, including in this one with Bill Findlow. In this clip, Bill tells Paul about just one of the many antics from Bill’s younger days working in Ancoats blacking bedsteads. This one is about the temptation of meat and potato pie.

The Future of the Archive

Paul Graney died in 1982 and Paul’s friends ensured that his extraordinary archive was saved. In the years following Paul’s death, his friends Barry Seddon, David Hall and others, set up the Paul Graney Memorial Folk Trust. It took the group 20 years to listen to, categorise and eventually digitise Paul Graney’s collection. Their work was supported by Greater Manchester County Record Office and by the Heritage Lottery Fund.

I’m really pleased to say that Barry Seddon is here tonight. Barry is the editor of Paul’s biography ‘One Bloke’, and a founder of the Trust.

All of Paul’s tapes, the digital files and his photographs are now here at Central Library, on display and accessible to the public. We’ve even got a remarkable set of handwritten notes on Manchester’s history and song lyrics, some of which were made by Paul right here in the library, under the steely gaze of our unfriendly librarians! 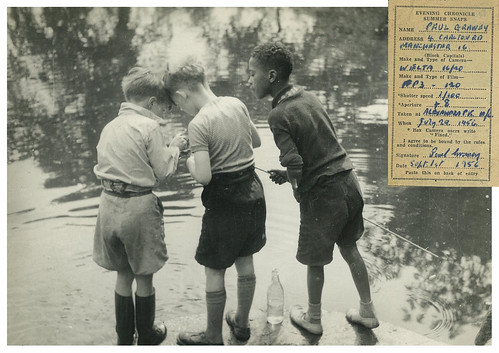 We’re really keen that Paul’s collection continues to be a living archive – just as Paul shared his tapes to encourage creative work, so we want to get musicians, performers, historians and volunteers using Paul’s remarkable legacy and creating new work from it.

This is the first time we’ve done a sound essay like this so it would be really useful for us (and for the Histories Festival) if you could comment on this blog about what you enjoyed and also what didn’t work for you. Thank you for listening. And thanks to Jennifer Reid who sang Paul’s A Story of Cotton so beautifully at the event.

To hear more sound archive clips, check out our Soundcloud.

4 thoughts on “The Life and Sounds of Paul Graney”