During the 19th century a community of Italian immigrants was established in Ancoats in an area that became known as “Ancoats Little Italy”. Last year we added a new collection to the archives, deposited by Roland Antonelli, which contains the story and documents relating to his grandfather Domenico’s arrival and life in Manchester.

Domenico Antonelli and his wife Christina arrived in Ancoats in 1894 having left their home town of Picinisco in southern Italy twelve years earlier in search of work. Domenico was a skilled carpenter and further developed his craft as a cabinet maker in Paris and then London before settling in Manchester.

Soon after his arrival Domenico set up his first business. Using his cabinet making skills he started to produce ‘barrel pianos’ which were extremely popular at the end of the 19th century. The Antonelli barrel pianos became highly acclaimed and won several awards at international exhibitions.

Domenico and Christina’s sons and daughters (Ernest, Luigi, Romolo, Giulia, Elvira and Dolorato) joined their father in the family business and together they expanded and invested in several other enterprises including: an Italian grocery store on Great Ancoats Street; the Astley Arms Hotel, also on Great Ancoats Street; a wholesale wine merchants; and a factory making wafers and ice cream cones.

The barrel piano business was eventually closed in 1916 due to a combination of the effects of WW1 and a surge in radio listening which resulted in a decline in street music. This presented the Antonellis with an opportunity to concentrate more of their efforts on developing the wafer business.

The “International Wafer Company” was founded in 1912 at premises on Bridgewater Street in Salford. Demand for “International Wafers” and “Sugaco” cones grew rapidly and with the help of distribution agents and investment in process and production the business boomed. By 1926 Domenico Antonelli and his sons had opened a state of the art, purpose built factory at the “Progress Works” next to Lancashire County Cricket Ground at Old Trafford. Their archive contains a little booklet about the factory called “The Romance of Big Business” which highlights the key values of the company: a product of “a high grade quality” made in “absolutely hygienic conditions” by “expert workpeople” who were treated to “extensive playing fields” and “a large staff kitchen with a dining room to care for their every need”.

Throughout his life Domenico Antonelli was very involved in community activities and often took the lead on initiating and organising events. In 1913 he established and funded the “Star of Italy” a musical society set up to encourage an interest in music amongst the sons of the local Italian families.

The band was a great success and within a year of its founding thirty boys led the Italian Catholic Society’s procession in the Whit Walks. They were highly regarded for their musical abilities and uniqueness, wearing the uniform of Domenico’s Bersaglieri regiment of the Italian army, and even helped with recruitment into the British Army.

Domenico Antonelli became the first president of the ‘Italian Catholic Society’ and between 1926 and 1932 he and son, Romolo, organised the annual pilgrimage to Holywell. 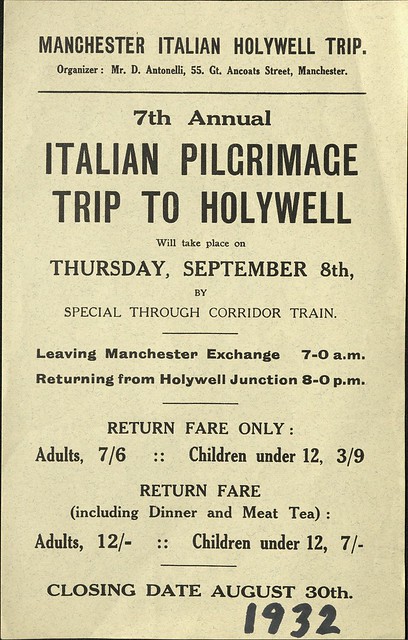 In recognition of his extensive business achievements and work within the Manchester Italian community Domenico Antonelli was knighted by the Italian monarchy in 1932 taking the title “Cavaliere della Corona d’Italia” which means “Knight of the Crown of Italy”.  Thirty years later his son Romolo Antonelli was also honoured with a knighthood for his equivalent outstanding contribution to Manchester’s Italian community.

Roland Antonelli, son of Romolo, has continued to take a big interest in the area where his grandfather settled and you can see his collection of Ancoats regeneration documents and newsletters here.

To find out about Domenico Antonelli’s descendents in Manchester and what happened to the Antonelli wafer and cone business, have a look here.