On April 12th 1961 Russian cosmonaut Yuri Gagarin completed a 108-minute orbit of the Earth to become the first human in space and internationally famous. The Amalgamated Union of Foundry Workers realised Gagarin had been a foundryman before training as a pilot and it made an audacious invitation for him to receive honorary membership of the Union at their headquarters in Manchester.

The invitation was accepted on May 23rd but the timing of the visit remained uncertain until July 7th when the Russians announced Gagarin would attend the Soviet Trade Fair at Earl’s Court on July 11th and stay a few days. No corresponding official invitation had been made by the UK Government but visits were hastily arranged with dignitaries including Harold Macmillan, then Prime Minister, culminating in lunch with the Queen. The AUFW trip was only confirmed to Manchester’s Lord Mayor by the Soviet Embassy the night before.

On July 12th Gagarin arrived at Ringway Airport at 10am in pouring rain. He was accompanied by AUFW President Fred Hollingsworth who had travelled to London for that purpose. Seeing the waiting crowds Gagarin insisted his car should be driven with the top down and stood without an umbrella so they could see the man for whom they had braved the elements. By the time he reached his first destination his Major’s uniform was soaked through.

This 1961 picture from the Manchester Local Images collection shows the AUFW headquarters at 164 Chorlton Road, now the Brook’s Bar Medical Centre. Over a hundred people including Gagarin’s entourage, union officials, a local MP and the office cleaner packed into the first floor boardroom intended for half that number. Hollingsworth presented Gagarin with honorary membership and a specially commissioned gold medal bearing the AUFW’s new logo and the slogan ‘Together moulding a better world’. Recently elected General Secretary David Lambert also gave Gagarin copies of two of his novels. From the balcony Gagarin waved to the crowd which had earlier brought road traffic to a halt.

His convoy then made for the Associated Electrical Industries foundry at Trafford Park. The crowds en route reportedly included Manchester United players breaking their morning’s training. At AEI’s Metropolitan-Vickers works Gagarin went on a factory tour and spent so much time receiving congratulations from the workers he saw little of the foundry, although he recalled his foundry training when admonishing one press photographer for standing on a half-finished cast.

Thousands gathered in the car park to hear Gagarin’s speech via his translator, Boris Belitzky. These included local women with children and workers from nearby factories sacrificing their lunch break. The young girls thought him handsome and onlookers were struck by his easy-going personality, but many were surprised by the space hero’s slight stature: “He’s only a bit of a lad.” He talked about the teamwork from thousands of workers that made his flight possible and hopes for peaceful cooperation in space exploration one day. “It’d be better having a pint with the lad,” more restless listeners told the Guardian. “I bet his hands are bloody sore with all that shaking,” another speculated.

This picture from shows Gagarin during the tour. The AUFW medal can be seen on his left lapel. The other lapel bears his Hero of the Soviet Union medal. 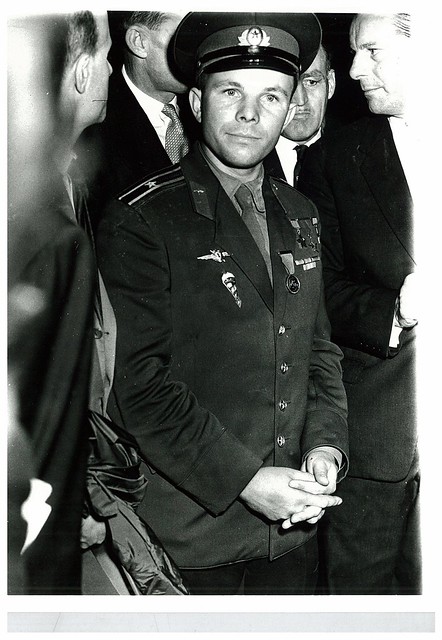 Despite the very short notice a civic reception at the Town Hall had been arranged and that was to be Gagarin’s next stop after a brief visit to the cenotaph on St Peter’s Square to lay a wreath. At about 1pm he was greeted on Albert Square by thousands of well-wishers, a brass band playing the Russian anthem and the sight of a Soviet flag draping the Town Hall. Lord Mayor Biggs was Gagarin’s host and he was joined for a five-course lunch by the Soviet ambassador and other dignitaries.

One guest was Sir Bernard Lovell, director of Jodrell Bank. This was well known to the Soviets after its radio telescope had successfully tracked the flight of Russian vessels such as Sputnik and had helped them with transmission of the first pictures of the far side of the Moon from their Luna 3 mission in 1959. Lovell invited Gagarin to visit Jodrell Bank. It is believed the cosmonaut was keen to go but his schedule would not allow it.

Granada TV was also thwarted by Gagarin’s tight schedule. Our archives show it had hoped Gagarin could be interviewed at their studios by Prof Jim Ring of the Royal Astronomical Society. Records include a draft script and a thank you note from Barrie Heads, Head of Outside Broadcasting, to David Lambert who was the only person available in the end. The collection also includes transcripts of Gagarin’s interview with the international press at Earl’s Court the day before.

Gagarin returned to the airport around 4:30pm and on to London where he stayed for the remainder of his visit. In a radio message to the AUFW in 1962 he recalled the warm welcome he had received from the people of Manchester, in particular the Metrovicks visit where “… the firm handshakes of my fellow workers in the moulding shop were dearer to me than many awards.”

The AUFW had been the principal sponsor of the visit had considered it a huge publicity success. “This has proved to be the greatest day in the history of our Union,” said Hollingsworth. The Daily Telegraph reported in December that the AUFW paid £500 for the visit but that Lambert thought it “… was well worth the cost.” 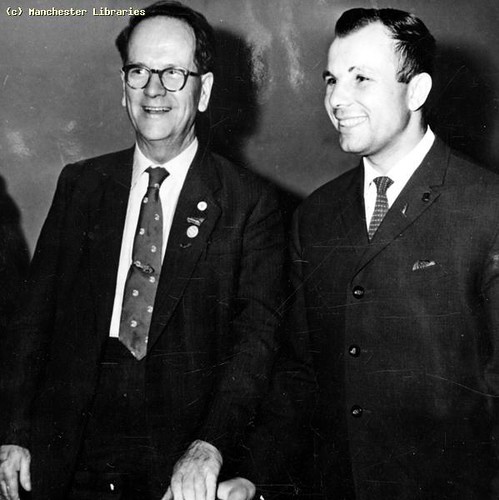 Gagarin continued his international promotional tour but never returned to space. In August his compatriot Gherman Titov orbited Earth 17 times over the course of 24 hours and became the first man to sleep in space. Tragically Gagarin died in 1968 during a training flight, leaving a widow and two daughters. By the end of the decade the Americans had surpassed Soviet achievements by landing men on the Moon and the world was talking of Neil Armstrong and the crew of Apollo 11 instead.

In 2011 the 50th anniversary of Gagarin’s historic flight saw renewed interest in these events, including the UK visit (see the website http://yurigagarin50.org/). A statue of Gagarin was placed on the Mall in London and has since moved to the Royal Observatory, Greenwich, where it was unveiled by his daughter, Elena. Each year 12th April is commemorated as Yuri’s Night by enthusiasts holding educational events and space-themed parties – learn more at yurisnight.net.

The North West Film Archive have footage of Yuri’s visit to Manchester which can be viewed in the film pods in Archives+.  These books in Manchester Central Library cover Gagarin’s life and Manchester visit in more detail:

Yuri Gagarin in London and Manchester: A Smile that Changed the World by Gurbir Singh

Starman: The Truth behind the Legend of Yuri Gagarin by Jamie Doran and Piers Brizony.