The birth of the modern police force in Britain, the typical ‘Bobby’ is a fascinating and complicated process which I spent a good deal of time researching for my undergraduate dissertation.  Delving into the archives held at Central Library I found a good opportunity to revisit this topic by looking at how policing reform impacted on Manchester.

Unlike other nations, the British had for centuries been sceptical about establishing a police force, seeing them as a way for tyrannical leaders to oppress the people.  However by the start of 19th century these objections were increasingly looking outmoded and impractical.  The demobilisation of thousands of soldiers at the end of Napoleonic War, combined with the mass migration of people from the countryside towards industrial centres like Manchester, created the perfect conditions for a nationwide crime wave.

Unfortunately the government’s laissez faire attitude to law and order meant policing remained disjointed and almost non-existent outside London.  In Manchester, for example, a 1792 Manchester and Salford Police Act was supposed to have set up a police force for the city but was never really implemented.  By 1800, with a population nearing 100,000, the city continued to be administered under the old medieval system with a Borough Reeve (chief city official) in charge of law and order.  Despite the growing population, maintaining the law fell to a handful of men; a deputy constable, four beadles and, when required, 200 special constables.  All of whom were paid for out of the Poor Rate (a forerunner to the modern council tax).  Their role in combating crime and disorder was mainly limited to patrolling the streets.

For much of the early 1800s the policing of the city was dominated by one man, Joseph Nadin, who became Deputy Constable of Manchester in 1802. Before taking the position Nadin had worked as a thief-catcher a profession notorious for corruption and collusion with criminals. Jonathan Wild, an 18th century thief catcher had been revealed to be simultaneously running the entire London criminal underground while posing as an upholder of the law. Nadin own reputation for corruption followed him into his new position where he was noted for turning every offence into a felony, which allowed him to gain the greater reward. Looking through the Borough Reeve documents held at the Library I frequently came across his name as he held various other city positions during his term as Deputy Constable, and he was known to embezzle funds and take bribes. This allowed him to supplement his £300 a year income and by the time he resigned in 1821 he was able to retire to Cheadle Mosley in the Cheshire countryside. When he died in 1848, he left his family a small fortune, with a various properties in the North West to his Sons and £100 to his son’s three daughters. 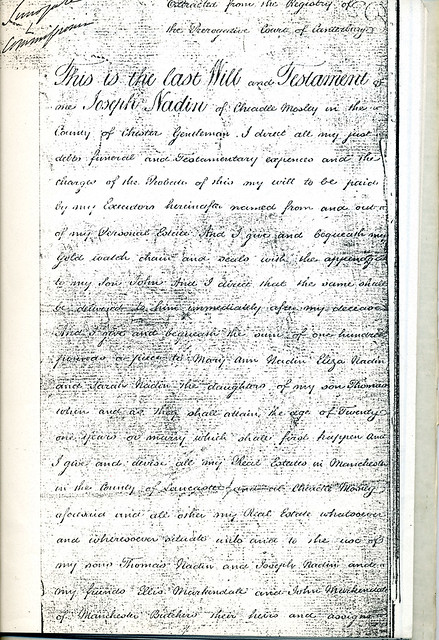 However this corruption and misuse of his position left Nadin with enemies and it was his involvement in the infamous Peterloo Massacre in 1819 that almost cost him his life. The incident occurred when a large crowd gathered at St Peter’s Field (modern day St Peter’s Square) to protest against the lack of political representation. The city authorities decided to break up the meeting and arrest the instigators by reinforcing Nadin’s small force with the cavalry of the local Yeomanry. Nadin arrested the leaders of the meeting but in the process 11 people were killed and 600 were maimed.

His involvement in what was a national scandal made him even more unpopular than he already had been, and looking through the archives I came across a newspaper article from a few months after the massacre detailing an attempt on his life.  While he was walking home one night he was shot at and the bullet passed through the crown of his hat. The article went on to say that a £500 reward was offered for the apprehending of the offenders, a considerable amount of money.

Following Nadin’s resignation in 1821 the policing situation did slightly improve. Nadin was replaced as Deputy Constable by Stephen Lavender, who’d previously been a ‘Bow Street Runner’.  ‘Bow Street Runners’ were the closest thing to a modern police force in Britain before the establishment of the Metropolitan police in 1829. They were set up in 1750 in London’s Bow Street Magistrate Court by the novelist Henry Fielding, and were the first carry out the detection of crime rather than just prevention of it. I was unable to find much about Lavender’s career in Manchester but it is likely that he took what he had learned in London to improve the running of the city. I did however come across a document from the Borough Reeve dated 1831 in which it was decided that due to the problems of public finance, Lavender’s salary would have to be reduced from £600 to £400, highlighting the continuing inadequacies in funding police forces.

In a future blog I will continue the story of the emergence of the modern police force in Manchester, taking it up to the end of the nineteenth century.

3 thoughts on “Policing Manchester in the Early 19th Century”